By sheriffrickstaly
0 Comment
3460 Views
ST. AUGUSTINE RECORD – By Matt Bruce
A WastePro garbage truck driver recently spotted someone driving his friend’s ATV through west Bunnell and flagged down two Flagler County sheriff’s deputies. The deputies used video from the garage truck’s feed and were able to track down the stolen ATV within hours. It resulted in four arrests.
Flagler County Sheriff Rick Staly zeroed on in that case this week when showcasing how his agency has incorporated technology more into its police work.

The Sheriff’s Office saw a historic reduction in crime in 2018, with the crime index falling 22% in Palm Coast and unincorporated Flagler — the zones covered by the largest law enforcement agency in the county. For months, Staly has proclaimed it the lowest crime index in the Sheriff’s Office’s jurisdiction since 2004, when the agency handled 1,400 crimes.

That was at a time when the county’s population was little over 60,000 residents. The Sheriff’s Office grappled with 1,439 violent and property crimeslast year, while its population soared above 112,000.

Staly credited the drop to a number of smart-policing tactics he’s implemented over the past 18 months. The key initiative has been CrimeMaps, an “intelligence-led policing” model that deputies and detectives began incorporating in 2017 by meeting weekly to discuss and analyze crime in each zone. Property crime is the biggest trouble area in Flagler and deputies said they use CrimeMaps to try and break down each crime to find similarities in burglaries, car thefts, larcenies and other offenses. The objective is to be able to link the criminal behavior to a possible suspect.

“We rarely focus on certain bad areas of the county, per se,” Sheriff’s Office chief investigator Paul Bovina said. “We focus on people. We know that people cause the crime, and when certain people are in jail or out in the streets, crime increases or decreases. So we’ve learned to focus on people, and by focusing on people, we’ve made some serious reductions in crime.”

Tuesday’s discussion was a makeshift version of one of the weekly meetings. Representatives from each of the agency’s departments gave a briefing on the latest trends they’ve encountered and tactics they use to make themselves more efficient.

One tool the Sheriff’s Office began deploying earlier this year is license plate readers, or LPRs, which can detect a wanted license plate and notify dispatch officers and deputies in the field of the possible geo-location of a suspect. They can be mounted on patrol vehicles or stationary equipment such as stop lights.

Officers from each of Flagler’s policing departments have used the technology to make busts and Staly said his deputies have found them very useful in identifying out-of-town perpetrators.

“A lot of the criminals that we apprehend are coming out of Palatka, they’re coming out of Daytona, or they’re getting off the interstate and coming south out of Jacksonville,” he said. “The LPRs, specifically, have helped us catch them.”

Beyond the drop in overall crime, the Sheriff’s Office also had a 16.3 percent drop in violent crimes in 2018 while the number of arrests spiked 15 percent.

Many of the year-to-date crime stats for 2019 seemed to point to a continued reduction in crime. Staly, however, spurned the notion that the technology would be leading deputies and said it would still be his officers’ hard work that would keep crime numbers low. 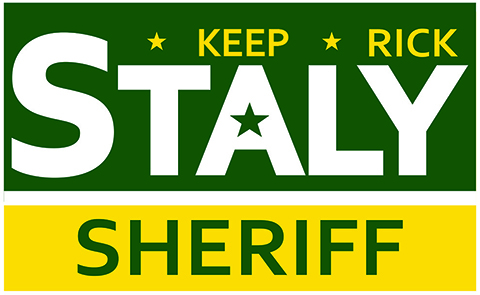