Homepage News Rick Staly, Unusually Popular for a Flagler Sheriff, Announces Re-Election Run as Challengers Have Yet To Appear
News

Sheriff Rick Staly is hoping for a less intensely competitive election campaign than the one he fought in 2016, and has his eyes on a third term if he wins a second.

The 2016 race for Flagler County Sheriff was by far the most expensive for any countywide office in county history: the nine candidates raised $320,600 between them. Rick Staly had accounted for $188,000 of the haul, $153,000 more than his next-closest competitor, John Lamb. It was also the most bitterly fought race of that election cycle, especially in the six-way Republican primary. Staly won the primary by four points, and the general by 15.

He’s hoping to have an easier, less expensive time next year. Wednesday evening at a local Republican Party rally, Staly, 63, announced his candidacy for a second term to significant cheers (“it was enthusiastic,” County Commissioner Dave Sullivan said, noting wryly that Staly got more applause than he did. Sullivan is running for reelection, too). Staly announced his run to media in a late-night email Wednesday, a modest, four-paragraph announcement written from his personal account on “Keep Rick Staly Sheriff” stationery. He did not mention in that release that Oliver North would be part of a fund-raiser for his campaign in November.

Staly’s is the first name in the sheriff’s race. It may stay that way. Judging from his public appearances, Staly’s popularity is still very high and significantly bipartisan. Some credit goes to his social media-savvy and rapid-response marketing department, which Staly runs as if he were a Madison Avenue executive grounded in Flagler soil. But no amount of PR could manufacture the record of the last three years.

Staly’s administration has had its challenges and difficulties, especially at the jail, with the death of an inmate and an assault on another. But it’s had none of the scandals, ethical issues or charges of abuse of power that kept every other sheriff’s administration in the news for the wrong reasons going back to Bob McCarthy before the turn of the millennium. Crime is down significantly more than the state average. There are more cops on the streets, more aggressive use of technology in crime-fighting, a dedicated initiative to address domestic violence.

Cooperation between police agencies has improved. Cooperation with the school board has been better than that of many school boards and sheriffs around the state in the wake of the Legislature’s requirements for more stepped up school security. Relations with local governments has been a bit rockier: Staly was hardly speaking with Craig Coffey, the former county manager, before Coffey was forced out, but relations have improved with Jerry Cameron. Staly ran into resistance from Palm Coast government he did not expect when he asked for more cops, with new City Manager Matt Morton willing to stand up to Staly as his predecessor never had.

Staly has continued his Friday night patrols, making the occasional arrest, letting the occasional official ride along. Inside the agency there are no overt, brewing rebellions in the ranks (as was the case with both Don Fleming and Jim Manfre at various points in their tenures). Staly survived the exodus from the old mold-infested operations center as an advocate for his employees who got the county to commit to a new district operations center in Palm Coast. It’s been a very busy three years, but for all the distractions, the agency appears to have powered on, the ranks’ work focused and respected across the community. And the streak of not a single officer-initiated killing in Flagler County continues: it is now in its seventh year, while the agency can take pride in more than half a dozen incidents where individuals could have been shot by a deputy, but weren’t.

So it’s not surprising that there’s no word yet of possible candidates looking to challenge Staly, certainly not among Republicans. The surprise would be that anyone would want to be that sacrificial lamb.

“The best compliment the community could give me and the men and women of the sheriff’s office is that nobody runs, that would be an outstanding compliment,” Staly said today. “We’ll see. I obviously wanted the community to know that I am seeking reelection and I hope that they keep me sheriff. I think we’ve changed the vision of the sheriff’s office. It’s having dramatic, positive results on the community, crime is down, our traffic fatalities are down 42 percent,” and car burglaries are down more than 50 percent. (Larry Jones, who retired from the sheriff’s office after a long career and ran for sheriff as a Democrat in 2016, beating incumbent Jim Manfre, told a reporter this evening he was “thinking about” running for sheriff. An hour later, at a Palm Coast Democratic Club meeting, a club official announced to the assembly that Jones was running.)

“We need to build on what we have,” he said in a phone interview this afternoon as he drove back from Orlando, where he’d attended the funeral of the Florida Highway Patrol’s Tracy Vickers. Vickers died in a crash last week as he drove home from an overnight shift. “A lot of things we have implemented, we started with very minimal staffing, because they were things we needed, this agency had needed for decades, and no one did it. So as a community grows we have to build some depths into these units, like the marine unit for example: it’s one full-time person, and look at how much Intracoastal and canals and two big lakes we have. That’s not including the ocean.”

Staly so far is framing his campaign message as the continuation of what’s been built and the initiatives put in place, with a new one to be added very soon. County crews are reconfiguring the 7,000 square feet Clerk of Court Tom Bexley agreed to cede to the sheriff at the courthouse while the sheriff’s office awaits its new home in Palm Coast. That work is expected to be completed in a few weeks. Once done, Staly plans to launch a real-time crime center, “which I think will take our crime fighting capabilities even to the next level.” He also plans a cold-case squad, with a focus on unsolved missing person cases, unsolved homicides (“fortunately we don’t have many of them over the last 30 years”), and sex crimes in which the statute of limitation hasn’t run out, and the perpetrator has not been arrested.

Staly being Staly, his confidence is never far off. He has conducted polls even after winning election. “I have not done a current poll,” he said. “I can tell you that almost a year ago my name was put on a poll and I had a 76 percent approval rating and I had a 9.84 percent disapprove, and the rest were either undecided or decline to answer the question.”

Asked if he was prepared to spend the sort of money he did in 2016, he said: “I don’t get into a campaign halfheartedly, so my campaign will do what it needs to do to be able to engage the community and make sure they know all the things that have been done and what the future vision is and to show the community again I’m the best candidate if I have an opponent.”

He was also asked not whether he felt he had any vulnerabilities, but what he thought his chief vulnerability might be. “I don’t want to sound arrogant but I don’t think I really have one,” Staly said. “You’re always going to have issues when you have almost 320 employees, so not everything is going to be done perfect, but that’s the reality for anybody, you know, a business owner. I think the community sees what has been delivered under my leadership.”

It’s the sort of confidence that has him looking even beyond 2020, though not beyond the sheriff’s office. If he wins the next election, he won’t say no to a third term. “I would say it’s open-ended,” he said. “If the community would like me for a third term, I’m more than willing to do that. As long as I still feel like we’re delivering a good product for the community and they communicate that they would like me, I’m not going to put an end date on it.”

Staly is one of five elected constitutional officers, along with Elections Supervisor Kaiti Lenhart, Clerk of Court Tom Bexley, Tax Collector Suzanne Johnston, and Property Appraiser Jay Gardner. Though only Lenhart has announced, all five Republicans are almost certainly in the running in 2020. None appear endangered, and some are likely to continue their streak of facing either no opposition or token opposition.

This news article was published on FlaglerLive.com on 10/03/2019 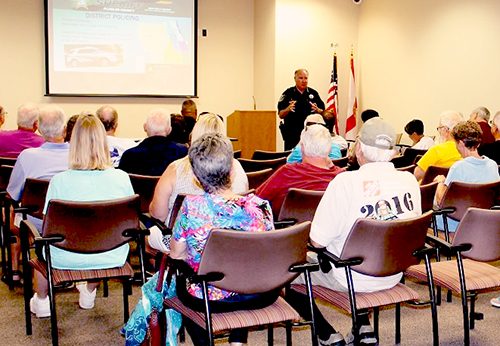 Why the Flagler County Sheriff's Office is Better Than Ever

CRIME IS DOWN 22%, AND TRAFFIC FATALITIES ARE DOWN ...